Undoubtedly, Renault Kwid is the one that sculpted success of Renault in India. To mark its successful second anniversary, Renault has launched special limited edition Kwid O2 in India with a price tag of Rs 3.43 Lakh (Ex-Showroom, New Delhi), costing Rs 15,000 more over the regular model.

The Limited edition gets special treatment both on exteriors as well as the interiors. Exteriors gets sporty graphics on roof, dual-tone ORVMs and contrast painted skid plates. Moreover, the wheels are also the painted ones which definitely make them look more appealing.

Coming to the interiors, the car gets “O2” embedded upholstery, dual-tone gear knob and contrast steering wheel. The AC vents are highlighted too. The Central console gets Piano-Black finish that makes it appear more on the premium side.

With the Anniversary edition costing 15K more over the regular trim, it includes a ton of new features and is still a great value for money. The Features include 7” Touchscreen MMI Infotainment system, lane change indicator, fully digital instrument cluster and speed-dependent volume control.

The History Of Renault Kwid

The Journey of Renault Kwid began in September 2015 in India. The Pre-Launch bookings commenced in the mid-September, 2015 for just Rs 5,000.  The car was launched with a starting price of Rs 2,56,970 (Ex-Showroom) for the base trim and extends upto Rs 353,140 (Ex-Showroom) for the top-end trim way back then. Renault also promised that Kwid would cost low on spares as well as the service and maintenance. The Kwid was featured and previewed by Bollywood’s sensation Ranbir Kapoor at that time. It was based on Renault’s CMF-A platform and was all set to manufacture in India. The Launch date of first generation Kwid was 24th September, 2015 to be precise.

The Kwid is 1471mm tall, 1579mm wide and 3679mm long as per its dimensions that made it bigger than both Maruti Suzuki’s Alto and Hyundai’s Eon. Moreover, the mini-SUV look of the Kwid looks quite appealing than its competitors. The ground clearance is 180 mm that surely helped the vehicle glide over breakers quite easily without chipping. The Kwid was loaded with tons of premium features such as the fully-digital instrument cluster and a 7” touchscreen MMI system. It was launched with a much smaller 800cc engine at that time. The 3-Cylinder, 800cc engine that was featured in the car produced 57Bhp and 72 Nm of peak torque, and was only available in manual transmission option back then. Moreover, to cope-up with the lack of power, there is a presence of 4-Valves per cylinder which made it the most powerful car in its segment. 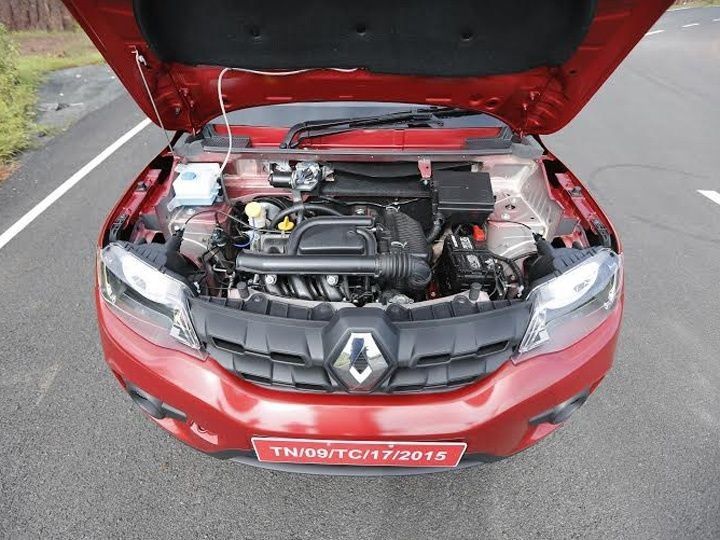 A month into its launch, Kwid clocked over 50,000 bookings achieving a new milestone in the history of Renault. The car also came out to be the most fuel efficient entry level petrol car with people reporting mileages of upto 25.14 Kmpl. The car definitely set new benchmarks in the Indian automobile market.

At the Auto-Expo 2016, Renault dropped a bomb when they unveiled the Kwid Climber and Kwid Racer. Both the concepts were unveiled to showcase the on-road and off-road capabilities of their best seller. Both the cars featured bigger tyres, bumper extensions and more exterior adornments. Where the Kwid Climber was made to perform off-road, the Kwid Racer sat quite low and was made to stick to the racetrack being more aerodynamic and even being equipped with a roll-cage.

It was the turn of Renault Kwid 1.0 Liter now, which was initially showcased as a concept at the 2014 Auto-Expo that included the 1.0 Liter Engine trim and much talked about AMT Transmission. Therefore, by August 10, 2016, Renault commenced bookings for the same.

On August 22, 2016, Renault officially launched the 1.0 Liter version of their most popular hatchback. The Kwid 1.0 Liter was powered by a 1.0 Liter SCe Petrol motor that produced 68 Bhp and 91 Nm of peak torque. Major features included a 7” touchscreen MMI system, keyless entry, a fully digital instrument cluster , central locking and front fog-lamps. Connectivity options included Bluetooth, satellite-navigation, USB charging and content display through an iPhone or an iPod. There is an availability of standard driver airbag too, that is already available in the on-going model.

Afterwards, a month into the launch of 1.0 Liter version, Renault introduced the automatic AMT version of the Kwid. The model was available at a price tag of Rs 4.25 lakh (Ex-Showroom, New Delhi). The AMT transmission was termed as the “Easy-R” as per the Renault nomenclature.

The Easy-R featured a 5 Speed AMT Transmission where the drive modes were selected with a Shift-Control Dial into three modes – Reverse, Neutral and Drive. The AMT powered Renault Kwid generated 68 Bhp and 91 Nm of peak torque. The Fuel efficiency came out to be 24 Kmpl as per ARAI.

On January 16, 2017, Renault introduced a special limited edition Kwid names as the “Live for More” edition. This special version was available in both the 0.8 Liter and 1.0 Liter engine option. This special edition featured red stripes on roof, bonnet, sides and even on roof-rails too. The Steering also featured contrast red pin-striping that was carried forward to the door pads too. This Limited edition was available for an introductory price of Rs 2.94 Lakh. 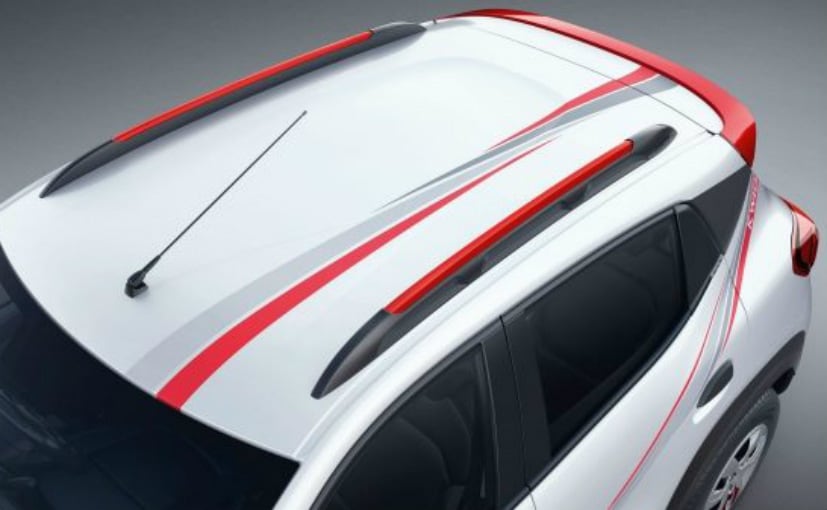 On February 20, 2017, Renault revealed that Kwid has clocked over 1,30,000 units in sale. This is the reflection of the Kwid being an outstanding vehicle and offering great value for money.

On March 9, 2017, Renault launched the Off-Road version of their most popular hatchback, the Renault Kwid Climber. It was previously showcased at the Auto-Expo 2016. The Exteriors saw an extension of bumbers, front and rear terrain protectors, new alloy wheels and contrast orange ORVMs. The interior also saw changes such as orange accents in the central dashboard and new orange upholstery.

The Kwid Climber was powered by the same 1.0 Liter SCe engine that generates 68 Bhp and 91 Nm of peak torque. Engine is mated to either a 5-Speed manual or a 5-Speed automatic AMT transmission. 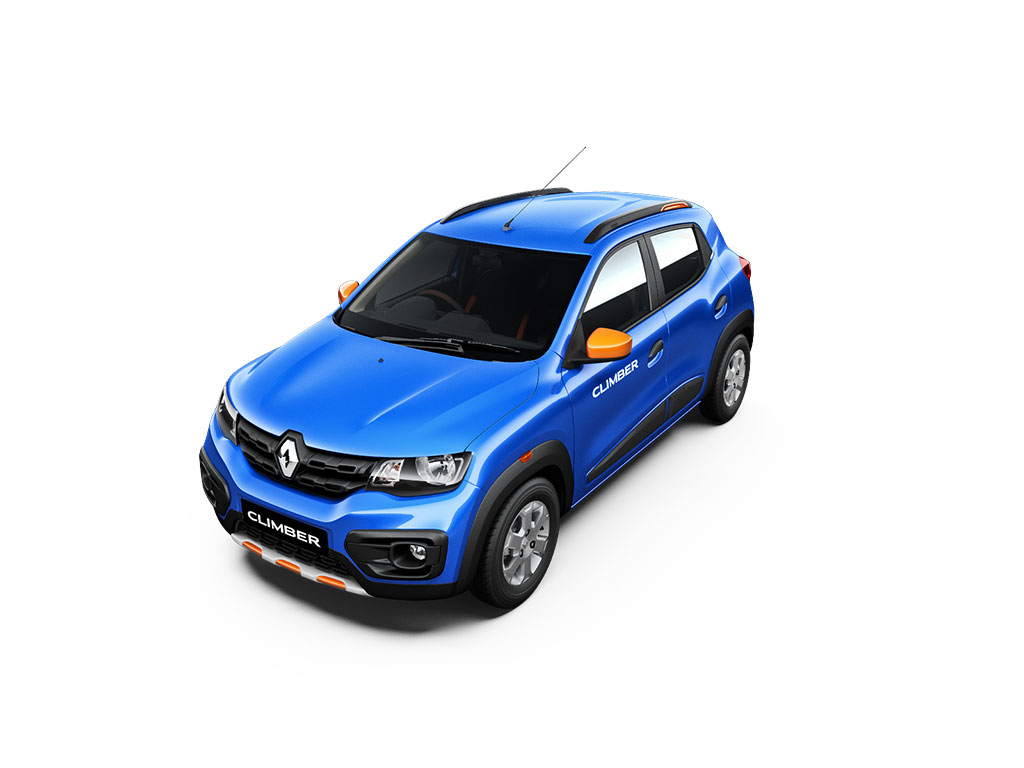 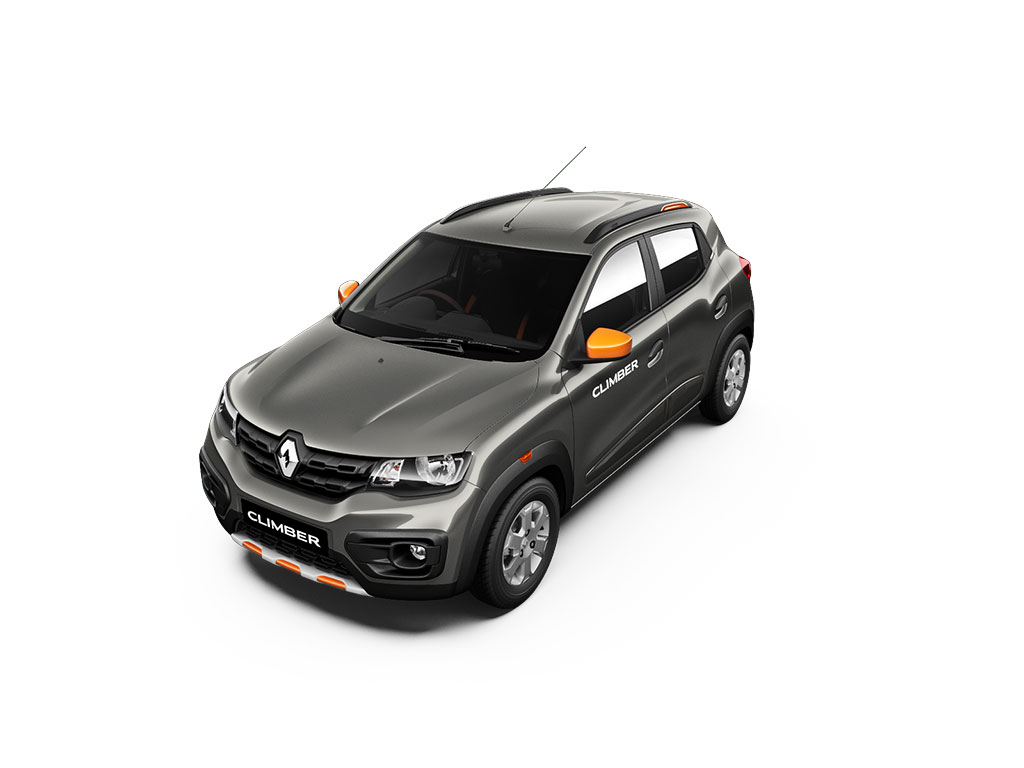 Less than 2 years after its official launch, the Kwid clocked over 1,76,000 units so far and crossed another milestone for Renault as per on July 25, 2017. Reaching this milestone, the Kwid became even more affordable with prices starting from Rs 2.62 lakh (Ex-Showroom). However, the total saving depends upon the Variant purchased, model and State tax.